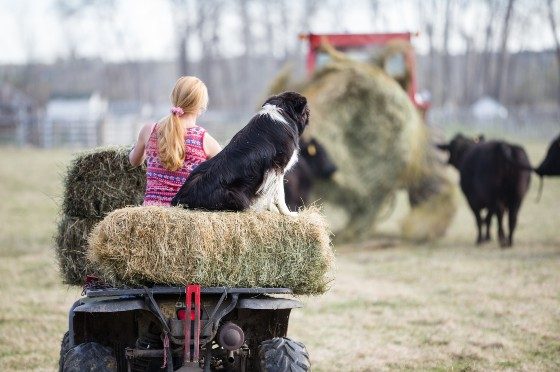 It was sunny and warm. The perfect day for a huckleberry lemonade, conversation, and “big gun sprinklers” to keep the rhythm of the afternoon. It was an unusual break from daily chores on Kerslake Ranch, east of Stevensville.

Sari Kerslake and her mom, Julie, were in between irrigation sets. The land they’re irrigating was conserved in 2013 by Hattie Farrell, a Burnt Fork legend who ran the ranch with her late husband, George, since 1963. Back then it was a dairy, evolved into a beef cattle operation, and is now the base of operations for the Kerslake Ranch.

Before this 93 acre ranch was conserved, Sari and her husband, Dan, were leasing Hattie’s place and a few other fields to grow grass hay. Over many years, they developed trust with Hattie, at first working hard, leasing the land, and then becoming friends. “She began to trust us after we had worked the land those 5 years. And that’s how it all started,” recalls Sari.

The average age of a Montana rancher is 60 years old. The Kerslakes were less than half that age at the time. Land is expensive, and in high-demand. Finding and financing land would prove to be nearly insurmountable barriers. As Sari puts it, “We looked terrible on paper. We had no money, it was tied up in equipment, and we didn’t own any land.”

After several years of working with Dan and Sari, Hattie began thinking about moving off the ranch into town, and wondering who would own the land after her. She wouldn’t just sell it to anyone.

“I grew up on a big cattle ranch and feel we should save all the ranch land we can,” Hattie said with conviction.

Hattie believed in the young Kerslake couple and reached out to them. She told Dan, “I would love to have you buy the ranch. Look at this option, it might be a way to make it work.” Hattie saw a pathway to transfer her ranch from one generation to the next. That’s when she approached BRLT to conserve her family land and help transition it to the next generation.

But the Kerslakes still needed to make buying the ranch pencil out.

They met with Ross Rodamacher at Farmers State Bank. After running all the numbers and scenarios he said, “You know, I think you kids can make this happen.” An individualized loan was created to make the transition from on ranch family to the next as seamless as possible.

A MODEL FOR THE FUTURE

Now seven years later, on this warm September day, Dan and Sari are working on some diverse business practices. Honey bees now buzz the ranch, pollinating and creating local honey. Sheep and cows dot the pastures, and their hay operation continues to grow.

“All our hay was sold before we made it this year. Which sounds great at first, but then it’s a delicate balance to achieve and deliver on all those sales,” Sari said. “Our sheep and cows graze the fields and make our ground much more productive because they naturally fertilize it. They poop on it from fall to spring.”

Sari and Dan have been thinking about the future of the ranch, now that they’ve owned it for seven years. “Dan and I think about who will come after, and if we have kids someday—or not—we’ll find someone who wants to keep this going,” smiles Sari.

“It could be young ranchers just like you, Sari,” Julie said. Mom’s words ring true for so many farming and ranching families in the Bitterroot, “Supporting open lands is supporting a tremendous amount of moving parts that sustain this valley, and keep it in the hands of the people that understand it, and keep it producing.”

Self-reliance, trust, and hard work brought this story to life. There is a way to pass on our Bitterroot way of life, our rural heritage, and ensure it is vibrant and thriving now, and for generations to come. Hattie, Dan and Sari, have provided a model showing how to do so. Together, we can help keep local agriculture and open lands thriving for future Bitterroot generations.