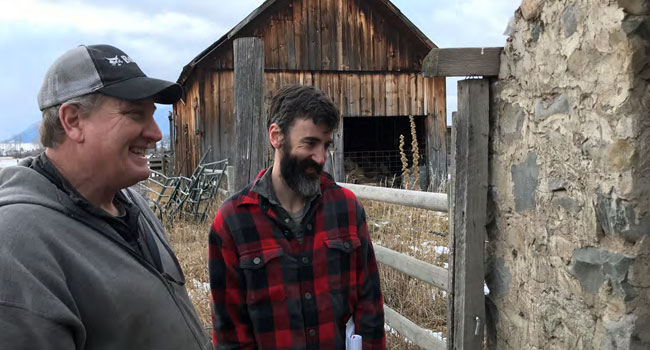 It Will Always Be Here

Not too long ago, a couple hundred acres of hay ground and wild meadows with an uncertain future lay tucked away in the Burnt Fork area of Stevensville.  The land was neglected, fences falling down, and the landowners who stewarded this land long ago were a distant memory.

That was until Troy and Dena Griffin found this diamond in-the-rough, and spent a number of years breathing life back into the soil and grasses, repairing fences and irrigation infrastructure.

The dream to bring this ranch back to life, some would say, came from an unlikely place. At a young age, the Griffin’s son, Garrett, joined 4-H and fell in love with raising animals and working the land. It became his passion to have his own ranch someday.

More often than not, young people are seeking out careers outside of agriculture, creating uncertainty for many long-standing Montana farms and ranches.

That’s not the case with the Griffin family.

IT’S NOT ALWAYS A SURE THING

“It’s my son’s dream to have a ranch. The odds of that happening are low. He started 4-H, kept steers at the neighbor’s, and showed them in competition. We wanted that for him. We want to help him fulfill his dream. With help from the land trust and the conservation easement funding, now we can,” Troy smiles warmly.
Now, what was once a big unknown is a sure thing. Garrett is a Bitterroot rancher, and Griffin Ranch is protected, forever.

Not only does Griffin Ranch conservation easement fortify the ongoing conservation in the agriculturally and historically significant Burnt Fork neighborhood, it stands as a beacon of hope for the future of Bitterroot Valley farms and ranches, and the young folks who desire to work them.

With resolve in his voice, Troy Griffin softly says, “When we’re gone, it’s over. But if we can leave something that lives on—we’d know that it will always be here. That’s a legacy to leave behind.”