It Was Everything to Us 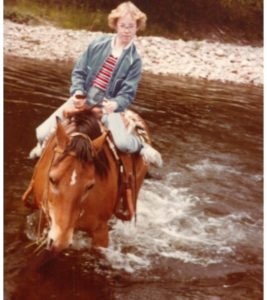 Wayne looks up at the skyline of the Bitterroots, then down to the bend where Skalkaho Creek meets the Bitterroot River. The sun’s rays create a warm glow over his shoulder as he talks about his daughter, Whitney, how she would ride her horse to the river as a child.

“It was everything to us: to watch our children grow up here, near the river,” he explains. Wayne Hedman, born and raised in Montana, believes raising his children here on the outskirts of downtown Hamilton with his wife, Helen, was the best decision they ever made.

The Future of the River

“Being near the river, it’s the best place for a kid to be, but that won’t happen by accident. As our community grows, we have to make sure that families have access to it in the future. You know, we didn’t have much money, but we were so lucky to have the river,” says Wayne. In the 40 years Wayne and Helen raised their kids here, Hamilton has seen 150% growth. Other areas in Montana have seen more, sometimes losing their connection to their own rivers.

That’s why we are working to conserve special places with communities and local landowners along the Bitterroot River. Wayne lives right next door to one such project: Skalkaho Bend Park, opening in 2020. Just as Steve Powell Park did in 2014, this new park, in partnership with the City of Hamilton, will ensure people of all ages and abilities can enjoy the river.

When Wayne hears this his face lights up. “For kids to love the land and Montana, they need to live it. They can’t just read about it. They have to get out from behind those
computers and be able to bring home tadpoles, bugs, and cool rocks. Even rural kids. We have to make sure we act now, while there’s still a chance.”

“Any kid can be around water. Don’t worry, they’ll be bringing home tadpoles, bugs, and cool rocks. They don’t just get to read about it in books; they get to live it.”

Now is the Time

As Wayne speaks, his voice cracks as he looks up from his hands, aged from years in the Montana sun. “Imagine how amazing it will be to conserve land so close to the center of town that it will keep the wild close to home. Everyone needs to see it, feel it, smell it. I know the wild, because it was so close to me, even this close to town. It means everything to me and Helen.

Conserving the waters, wildlife habitat, and working farms and ranches of the Bitterroot Valley, with you